The Odds Are Overwhelmingly In My Favor

When the radiologist used the ominous “I’m very concerned” about my latest mammogram, my mind just stopped. He kept asking if I had questions. “No,” I said. No, I thought. Again? No, not again. My surgeon, whom I had not seen since he had given me my all-clear four years ago, made time for me that afternoon. He looked at the films and ordered a biopsy, but he began talking treatment immediately. Yes, again.

Eventually I caught my breath and cleared my head, and then I called Pat Jones, one of the many virtual friends I have met since my first breast cancer diagnosis in 2006.


In addition to sharing a name and being the same age, Pat and I now share a diagnosis: two different bouts of triple-negative breast cancer.  Pat was diagnosed the first time in 1987, the second in 2003. She’s 28 years past her first diagnosis and 12 past her second. 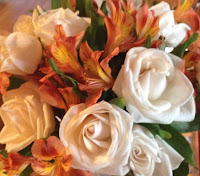 I am nine years past my first and three weeks past my second.

If I have to follow Pat’s footsteps by getting TNBC twice, I plan to also follow her long disease-free lifeline.

To be clear: This is a second primary cancer, not a recurrence. My original cancer is long gone, but I am special and get to have a second serving. The second cancer was tiny—4 mm, or .4 cm. Miniscule. So small that the surgeon couldn't even feel it, despite knowing exactly where it was. My prognosis is excellent. We got it exceptionally early.

It was in the same breast as the last one, so I could not have a lumpectomy, as that breast has already been radiated; radiation only works once.

Still, I would have chosen a double mastectomy even if a lumpectomy had been an option. I would have done this with my first diagnosis had I been better informed. (Lumpectomies plus radiation are as effective as mastectomies on treating individual tumors, but they leave breast tissue that can get a second cancer later.)

I now know the territory much better and felt it was time to send both sisters packing, including the healthy one. I didn't want to worry about the possibility of cancer in the other breast, plus I didn't want to be a one-breasted wonder. I did not have reconstruction. I have never defined myself by my breasts, and I did not want to add more foreign elements to my body, so I am good with my new boyish charm, some occasional polyester fiberfill and eventually, perhaps, breast prostheses.

Talking to Pat was a godsend—she made me laugh, she sent me pictures of cheap padded bras she gets at Walmart, she told me about her full life after a double mastectomy, and she encouraged me to blog about this. We talked for more than half an hour and I got off the phone with renewed faith and energy.

Our talk and subsequent emails made me realize how much I have gained from my relationships with other women on this little journey of ours. My introduction to Pat came six or seven years ago, when I saw her comments regularly on various breast cancer discussion sites, encouraging others with TNBC under the name Noni Jones. I contacted her, asking to interview her for my book, and she agreed. Her daughter Candy was also diagnosed with TNBC several months after Pat and she is also 12 years past diagnosis, cancer-free.

How fortunate I am to know just who to contact to calm me. To provide the been-there-done-that-and-moved-on.

For a remarkable professional perspective, I also emailed Carol Scott-Conner, a surgeon at the University of Iowa Medical Center, who wrote the foreword of my book.  Carol is, first, a warm and wonderful woman who, interestingly, is also my age. Equally important at this point, she is a breast cancer surgeon who also became a breast cancer patient; she had a mastectomy in 2013. She called me right away. Her assessment of my prognosis: “The odds are overwhelmingly in your favor.” Yes! I hung up, reassured and blessed to have this caring woman in my life.

So this was a shock and not how I planned to spend my summer. But, hey, as Pat reminds me, I am “one lucky chick.” This puppy was in its infancy and it is now gone. Had I put the mammogram off until this fall, as I had considered, I could be facing a different scenario.

As it is, the odds are overwhelmingly in my favor.

The Details
I had a routine mammogram June 3, then was called back the next day because the radiologist had seen calcifications. Most women have calcifications at some point and the great majority of them are benign. They come and go and are more common as we age. Some, though, spell trouble. I had a close-up mammogram that showed dense tissue behind the calcifications. An ultrasound didn't help much—the mass was so small the technician had trouble finding it.

(One annoying, sort of heartless tidbit: The technician called in another woman to help her find the mass. The second woman zoomed in and found it right away. “There!” she said, with smug satisfaction, obviously pleased with her success. Good for her, she found that I probably had cancer. Glad it made her day.)

The radiologist invited me into his lab to look at my film. My calcifications were linear, with uneven sizes and shapes—he made it clear he thought I had breast cancer again. Very small, very early, perhaps DCIS. But breast cancer nevertheless.

My surgeon ordered a stereotactic, or mammography-guided, biopsy. That didn't work because the calcifications were so close to the skin the radiologist was afraid he’d tear a hole in me with the machine. So I ended up with an ultrasound-guided biopsy.

The radiologist who eventually did the biopsy was the same one who did my original and who told me, at that time, encouragingly, “This is not that bad.”  This time, she said, “You know this is tiny, don't you?” So I again was benefitting from her positivity, again benefitting from a strong woman I had met through my first cancer.  She said the calcifications could actually be benign lines caused by the radiation. Think about that, though: caused by the radiation.

She called the next morning, June 12, with the results. From her tone, I knew what was coming: It was cancer. Infiltrating ductal carcinoma, 5 mm, with accompanying DCIS. It was high grade, which told me it was likely TNBC again, although receptor status was not yet indicated.

My surgeon was on vacation in California, but called when he got the results. I scheduled the surgery for ten days later, June 22. Surgery was a success, with no lymph node involvement, and the tumor was even smaller than they thought: 4mm. It was indeed TNBC again. I had the dreaded drains for a week, but blessedly had them removed three days ago. No more treatment is needed. It’s too small for chemo to be worth the risk and tamoxifen does not work on TNBC.

I am thankful for that eagle-eyed radiologist who first saw my weird calcifications and called me back in, and for the timing of my mammogram.

I am once again going for daily walks with my husband. Today we did two miles and I hope to keep pushing that until I get back to the four miles that had been our standard.

Family and friends have surrounded me, reminding me I am cherished. Our daughter came to pamper us with love and life and amazing food. And for days after the surgery, our doorbell regularly rang with floral deliveries. I’ve illustrated this post with some of them. I got personal and virtual hugs galore; happy, funny, and thoughtful cards; and I have celebratory lunches with friends every day next week. Soon we will finally head to our Colorado cabin for the rest of the summer.

Now that I have processed it all and got the final, encouraging pathology report, I have regained my perspective. On a scale of one to ten of the worst things that could happen to me, I would rank this at about a four.

My morale is great and I am healing well. I am usually surprised when I try to reach something and it hurts. Then I remember, "Oh, yeah, surgery."

But I know I got this sucker.