Recovering in the mountains 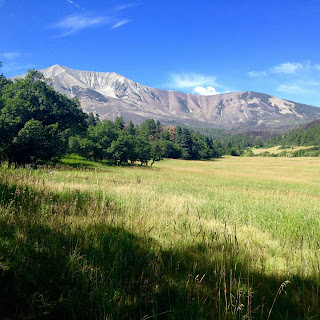 We finally got to our Colorado cabin a couple of weeks ago. This is the meadow in front of the cabin. It's a great place to recover.  We had a forest fire here two years ago, so the land itself is recovering. We're quite the pair.
Posted by Patricia Prijatel at 10:57 AM 3 comments:

What Caused My Cancer?

When I speak to groups about breast cancer, I always make one important point: “You didn't cause your cancer.” I say it because I know women think it. What did I do? They beat themselves up with the what ifs and whys at a time when they need to be focused on building their physical, mental, and spiritual strength.

So, when I was diagnosed with a second primary cancer last month, one of my first thoughts was, “What did I do to cause this?”

It’s inevitable that we go there, though, and it might even be somewhat worthwhile, if we can pull off an honest analysis without whipping up the blame. I did beat triple-negative breast cancer the first time nine years ago and plan to beat it again. But, to be truthful, the healthy lifestyle I adopted after my first diagnosis, which I credited with my ongoing good health, became a bit difficult to sustain. Was that a factor?

As you’ll see, just about everything could have caused this. If only I had been perfect.

1. Too much alcohol. The World Health Organization considers alcohol a carcinogen and says there’s no safe level of alcohol use, especially for those at risk of breast cancer. The more you drink, the greater your risk. Immediately after my first diagnosis, I had wine only on special occasions; at dinner I had organic black cherry juice in a wine glass, which was pretty delicious. Over the years I gradually started drinking more, adding martinis and an occasional shot of whiskey. At home I kept myself to one drink, but at dinners with friends, I had two or three glasses of wine. And this past winter I had some back problems and wine was the only sure-fire painkiller, so I would have only a glass, but it was a big one. 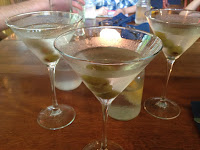 Research shows that alcohol is a bigger factor in estrogen-positive breast cancer than in TNBC, but it is still a factor.

But here’s the thing about research on alcohol: It is done largely using surveys, so participants self-report their alcohol use. And human nature is such that we typically underestimate our bad behavior. So people who usually have three glasses of wine a day might report that they have one, and when they get cancer, that one measly glass is seen as dangerous, whereas the actual amount was three times that much.

2. Too few vegetables. And too many French fries and tacos. My original post-cancer diet nine years ago focused on at least five servings of vegetables and fruits, which has been shown to counter breast cancer, especially triple-negative. Eventually, I got a bit lazy and replaced some of the healthy stuff with unhealthy foods.

And I especially didn't eat enough dark, leafy greens, which are high in folate that can reduce breast cancer risk. Also, my stomach had been given me problems because of too many pills, so I even stopped taking the 600 micrograms supplement of folic acid that has been shown to reduce the effects of alcohol.

3. Change in exercise routine. This one is seriously weird and counter to all the research, but I think I finally figured it out. A year before my first diagnosis, I had begun to work out with a personal trainer and ultimately lost 50 pounds by jogging, increasing the length and speed of my walks, and eating fewer calories.  In the nine years since then, I had gained back 15 of those pounds, so this winter, I got a Fitbit and started increasing my exercise and reducing my calories. By the time I was diagnosed the second time, I had lost 10 of those pounds. 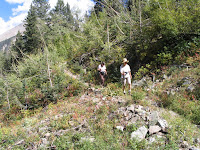 Why, with both of my diagnoses, did weight loss and increased exercise end up in cancer? I think it was because I had gained the weight in the first place and the cancer was already starting when I began to lose the pounds. So the weight loss probably helped me fight the cancer and kept it from returning, but it came too late to stop it from growing in the first place. Weight gain is directly associated with all forms of breast cancer, including TNBC.

My takeaway: Keep the exercise up and the pounds off. Don't get to the point at which increased exercise and reduced calories constitute a change. Make that the standard.


4. Radiation. The irony of breast cancer treatment is that it tends to put you at risk of second cancers. The National Cancer Institute warns that its Risk Assessment Tool for breast cancer is not appropriate for women who have had previous radiation treatment to the chest because this increases their chances of cancer. Not only did I have the standard 35-day radiation therapy, but I have had multiple chest x-rays since then for COPD. So my chest has had a lot of radiation, and radiation can cure as well as cause cancer.


5. Genetics. I have no family history of breast or ovarian cancer, although my Eastern European heritage puts me at increased risk of the BRCA1 or 2 genetic mutation. I really don't think this is genetic, though. I was 60 at the first diagnosis and 69 at the second, plus I have plenty of lifestyle issues that point to an increased risk.


Still, I think I live a lot healthier than most people I know—people who, by the way, don't get breast cancer twice—so there has to be some inherent tendency toward cancer in my DNA. Cancer, researchers say, is as unique as our DNA, so I have to factor in my own inherent whatever here. Plus, our DNA can be affected by factors in our broad environment—air, water, food, diet, stress—as well as by inherited traits. I was the fifth child, born when my mother was 40, so I often kid my siblings that I got the bad eggs. 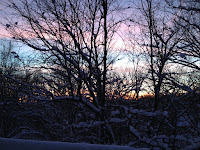 Also, I was born in December, and winter babies are more prone to sickness later in life, perhaps linked to winter illnesses, cold temperatures, and indoor pollutants while still in the womb.

Healthy lifestyle can combat DNA damage, which is good news, and reason to return to taking good care of my body.

So, no, I didn't cause this. Maybe I didn't do all I could to prevent it. I got sloppy and cocky and apparently I don't have the leeway I thought I did. I don't believe in guilt trips, but making this list has reminded me of all the good things I can, and should, do for myself.

That French fry or glass of wine is nowhere near as rewarding as a healthy body.
Posted by Patricia Prijatel at 7:20 PM 12 comments: