Many breast cancer patients undergo neoadjuvant therapy to reduce the size or extent of the cancer before surgical intervention. Complete response of the tumor to such treatment signifies an improved overall prognosis. Today, no marker is applied to identify tumors which will respond to such treatment, and as a result, only a subset of patients exhibit benefit from it.

Erik Knudsen, Ph.D, Professor of Cancer Biology and the Hilary Koprowski Chair in Cancer Biology, was excited that discoveries from his life-long research on the RB-pathway were making their way into the clinic.
"This represents a potential new biomarker that could be used to tailor treatment plans for women considering neoadjuvant therapy and is a testament to the importance of cancer research," he said.

For the study, researchers, including Gordon Schwartz, M.D., Director of the Jefferson Breast Care Center and Adam Ertel, Ph.D., Bioinformatics Specialist, Department of Cancer Biology, performed a combination of gene expression profiling to identify those with RB loss and direct histological analysis in over 1,000 breast cancer patients who had undergone neoadjuvant therapy. These patients represented distinct subtypes of breast cancer and were treated with multiple different therapeutic regimens.

RB loss was associated, the team found, with an improved response to all the neoadjuvant regimens investigated in the major subtypes of breast cancer.

"Together, these data indicate that the loss of RB, which occurs relatively frequently in locally advanced disease, could be a useful tool for defining patients who experience an improved response to neoadjuvant chemotherapy," said Dr. Witkiewicz. "Based on these findings, we have initiated a prospective clinical trial at Jefferson, evaluating the association of RB and another marker, PTEN, with the response to neoadjuvant chemotherapy."
###
The clinical trial is open to patients who have a diagnosis of triple negative breast cancer and are eligible for neoadjuvant chemotherapy. (clinicaltrials.gov/ct2/show/NCT01514565).
Posted by Patricia Prijatel at 9:57 PM No comments:

Seeing the Trees in The Forest, And Where We Fit In

A little evergreen tree has died alongside our road and, as we walked by it yesterday, my husband wondered why.  All the other trees around it are healthy and it did not look like it had been hit by lightning or damaged by wind or attacked by bugs.

The tree is about eight feet tall, so it lived several years.  We are in the Rocky Mountains and this little guy took root on its own, taking seed and growing in that place by the road.

The trees all around it are scrub oak, so maybe the soil was not right for an evergreen.  Maybe it just grew in the wrong place, in soil that could not sustain it.  Still, there are evergreens nearby that soar to the sky, so maybe this little tree was just too weak to begin with. 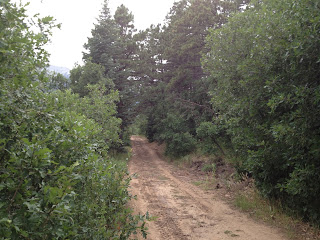 Could we have done something to save it?  If we were in the city, would we have babied it and maybe kept it alive?  Or would it have died sooner there?

These are the same questions we ponder about why some people get sick, why one disease affects one person more than others, why people who live healthy lives still can’t beat some illnesses, yet people with deplorable habits keep going and going.

It’s the old nature versus nurture argument.  Bad genes or bad environment?  Or both?

I am sort of over being angry at people who have dodged major illnesses—largely because, frankly, there aren’t that many of them.  Seems like most people I know have something to contend with—debilitating arthritis, diabetes, heart disease, Alzheimer’s.  But when I first got cancer I did look around at people who obviously were not living as healthy as I was and wondered, Why me and not them? And then I realized that I had no idea what they were dealing with and I should just stop being so angry and judgmental and get over myself.  It was not their fault I got sick.

Still, you have to wonder about this poker game we all play with our health.  Some seem to be dealt a good hand to begin with, some make the best of a poor hand, some try but can’t make a straight out of a pair of twos, and some look at their cards and just fold.

I have one friend who never exercises and has a diet full of fat, yet she is in her mid-80s, hale, hearty, and youthful-looking.  Another smoked all his life, drank, and never exercised, yet he is pushing 80 and has nothing seriously wrong physically, although I do think he looks back at his life with serious regret.  Still, the big C didn’t get him, nor did any major illness.  I wouldn’t swap places with him, though, even if I knew my cancer would return.

I also know a wide variety of cancer patients—fighters who refuse to let the disease get the upper hand, questioners who search for their own information rather than listening to the docs, accommodators who go along with whatever the doctor says, worriers who can’t get beyond the fact that they might die.  Most of us are a mix of these traits, fighting one day, living in worry the next.  But we are all built differently, both physically and mentally, so we all react to our disease differently.  Nobody is right, nobody is wrong.  We’re all just us, being our own little trees fighting our own little battles.

We cannot escape our genes—they make us prone to certain diseases, give us the strength to fight others, and offer a blueprint for either a long or a short life.  Still, we can change some of that—the science of epigenetics demonstrates that lifestyle and environmental factors can influence our genetic makeup so that, by improving things such as diet and physical activity and by avoiding unhealthy environmental pollutants including stress, bad air, and chemicals, we can eventually build a healthier DNA.

I was born into a history of cancer.  My grandmother and both of my parents had forms of cancer, although none of them had breast cancer.  I was the pioneer there.  But both parents lived into their 80s and remained in their home until they died, surrounded by their family.  So, I might have a tendency toward cancer, but perhaps my genes also mean I will hang around for a couple more decades.  And my particular mix of nature and nurture has given me an ability to love, to laugh, to process health information in a way that might make me proactive, and to keep going, assuming all will be well, at least at some level.

Maybe I won’t end up as one of the stronger trees in the forest, maybe I will be the gnarled, crooked one.  Maybe disease might slow me, but I feel I am rooted deeply in decent soil—family, friends, community—so I am going to push on, grow how I can, and, in the process, help shade and nurture the other trees around me.
Posted by Patricia Prijatel at 11:01 AM 4 comments: