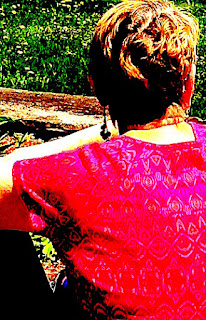 My nephew had been struggling with a diseased foot for more than a year—it got infected and did not heal, likely a consequence of his type 1diabetes. He will have to have his leg amputated, a step that stunned the entire family. In discussing his concerns, my sister told me that he doesn't want his leg to just be cut off and thrown into the trash.

“That’s what they did with my breasts,” I said. “Cut them off and threw them away.”

Hearing this, the rest of the family was silent, sort of struck by my vehemence. I seldom give details about my breast cancer treatment—living through it once was enough—so this surprised us all. Me most of all.

I had no idea of the anger I had suppressed beneath a cheery I’ve-got-this exterior. And to have it come out so melodramatically and inappropriately—this was about Rod, not me—was embarrassing. But that’s the case with repressed anger. It doesn't go away; it just builds and eventually spews itself like a verbal volcano, scorching all in its path.

So we returned to Rod’s issue, and our hope that he could soon have surgery and that he would respond well. A month ago, doctors amputated his leg beneath the knee and he is healing well. He’ll be measured for a prosthesis in a few weeks.

Meanwhile, there’s me and my breasts in a surgical landfill somewhere.

My double mastectomy was the result of a second bout of triple-negative breast cancer. I had successfully recovered from my first round, in 2006, and was looking forward to celebrating ten years cancer-free. So I was more angered than anything when the beast roared its nasty head in the same breast in 2015, nine years almost to the day of my first diagnosis. The second cancer was small, but I easily opted for a double mastectomy, wishing I had done that the first time—just sliced the darn things off.

I didn't expect it to feel like this. Even after nine years of working with breast cancer patients, corresponding with hundreds, writing a book and scores of articles and starting a well-regarded cancer blog.

I look in the mirror and see a disfigured woman looking back. My surgery looks like hell, frankly. I have extra, uneven flaps on the bottoms and side of both former breasts. If I don't wear my prosthesis, these bumps show through my shirt, looking like tiny mole tunnels popping through my chest wall. A friend, who is a breast cancer surgeon and survivor, says this type of result frustrates doctors. The problem: docs operate on a woman while she is lying down and end up with a chest that is nice and even and flat and clean. But when the woman stands up, gravity takes over and packets of fat appear. These are not remainders of the breasts, but fat tissue that had surrounded them. Multiple docs have checked my surgical site and all is supposedly well—it’s healing as it is supposed to, and it falls within the fairly wide spectrum of normal. It just looks awful.

My surgical scars don't line up, probably because I'd already had a lumpectomy in my left breast. I see photos of women who have cool tattoos on their breasts and who proudly go flat, but they actually are flat, with a clear surgical line across their chests, not a jagged barbed-wire looking strip.

Of course, I could have plastic surgery to smooth things out, but I don't want more operations and more recuperation and more stuff added to my body. I do wish I’d had a plastic surgeon involved with surgery in the first place. But I now have much better understanding of why other women choose that route, especially younger women. I always got this intellectually, but now I get it emotionally.

I have several decent prostheses—a fancy gel-filled one that looks like a creature that washed up on a beach, a lighter foam set, and a cotton-filled number. The creature looks the best on, but the cotton one feels best. And I notice that, in photos, my body looks pretty trim and tight, with the kind of firm breasts you don't normally see on a 70-year-old. So whoop.

I feel great and continue to walk two miles a day and hike in the summer at our Colorado cabin. I’m writing another book and painting again and enjoying my family. My husband and I travel a lot and just enjoy one another in our down times.

So life, really, is good. And if Rod can move on after losing a leg that is essential to his mobility, I can be just fine losing breasts and having a chest that looks like a mistake.

Still, I retain the right to be grumpy.

Posted by Patricia Prijatel at 4:24 PM

While I have not had a mastectomy, I know that I too have a little suppressed anger over my breast cancer experience. Thanks for posting.

Just want to say thank you Patricia. I got your book immediately when I was diagnosed in June this year. It made it all feel less scary after reading so thank you. I had similar case to your diagnosis however mine is weakly estrogen positive. I've had a lumpectomy and I have 2 more chemo to have. I'm thinking about having a mastectomy with recon though instead of rads given your experience I'd be interested to hear your thoughts.. I'm 40. Thx Michelle

So glad the book helped, Michelle. At your age, I would certainly do recon! Best of luck, and hugs!

I am so happy to have found your blog. I was diagnosed with stage 2 TNBC a month ago and undergoing chemo first (12 weeks of taxo+ carbo) then 4 cycles of AC every three weeks before surgery. I have 6 months to think about a lumpectomy or a bilateral mastectomy and reading your story leans me further in to the latter choice.

At 35, pre children (hopefully that option might exist, I have been given the Lucrin jab to put my ovaries to sleep the next 6 months), I think about if I by some miracle have a child, I'd have to worry about more lumpy boobs, breastfeeding, clogged ducts and increased risk of a relapse?

I am hanging on to dear life for chemo and trying to take a day at a time, but I wonder very often about what happens next and how to carry on without that nagging fear creeping up at night.

The internet is full of scary things, and I am so glad I found sound reason and stats in your blog. The local book store is bringing in your book, looking forward to get my hands on it soon.

J: Glad the blog is helping, and happy that your bookstore is getting the book. Stage 2 is highly beatable, so plan on that. And do your research on surgery, especially talking with other women, and do what your gut tells you. You'll have plenty of time to actually listen to what YOU really think. Hugs.